The Miró Quartet is celebrating its 25th anniversary this season as one of America’s most celebrated string quartets, having performed throughout the world on the most prestigious concert stages.

In their concert this spring, the quartet will be joined by clarinetist David Shifrin. They’ll perform A Rendezvous with Benny, an extension of their Archive Project. They’ll celebrate the artistry of Benny Goodman centered particularly on the relationship between Benny and the Budapest Quartet. The Mozart Quintet is a nod to Benny and the Budapest Quartet who recorded that work in the ’50s.

More on Miró, David Shifrin and Program Notes below!

After the concert, please stay for a Q&A with the artists. 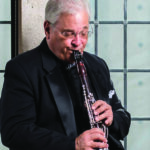 Shulman: “Rendezvous”
David Schiff: Swing arrangements for Miró Quartet with David Shifrin:
– How Am I To Know
– A Smooth One
– Temptation Rag
Peter Schickele: Spring Forward
*****

The Miró Quartet is one of America’s most celebrated and dedicated string quartets, having been labeled by The New Yorker as “furiously committed” and noted by the Cleveland Plain Dealer for its “exceptional tonal focus and interpretive intensity.” For over twenty-five years the Quartet has performed throughout the world on the most prestigious concert stages, earning accolades from critics and audiences alike. Based in Austin, TX, and thriving on the area’s storied music scene, the Miró takes pride in finding new ways to communicate with audiences of all backgrounds while cultivating the longstanding tradition of chamber music.

The Miró celebrated its 25th anniversary in the 2020 season by performing a wide range of repertoire that pays homage to the legacy of the string quartet and also looks to the future of chamber music and string quartet playing in the U.S. In honor of the 250th anniversary of Beethoven’s birth at the start of the pandemic, the Quartet undertook a remarkable project during which they broadcast live performances of the composer’s complete string quartets remotely from venues throughout Austin, TX for the Orcas Island Chamber Music Festival and audiences from around the world in summer 2020.

Formed in 1995, the Miró Quartet was awarded first prize at several national and international competitions including the Banff International String Quartet Competition and the Naumburg Chamber Music Competition. Deeply committed to music education, members of the Quartet have given master classes at universities and conservatories throughout the world, and since 2003 the Miró has served as the quartet-in-residence at the University of Texas at Austin Sarah and Ernest Butler School of Music. In 2005, the Quartet became the first ensemble ever to be awarded the coveted Avery Fisher Career Grant.

Having released many celebrated recordings, the Miró recently produced an Emmy Award-winning multimedia project titled Transcendence. A work with visual and audio elements available on live stream, CD, and Blu-ray, Transcendence encompasses philanthropy and documentary filmmaking and is centered around a performance of Franz Schubert’s Quartet in G major on rare Stradivarius instruments. The Miró records independently and makes its music available on a global scale through Apple Music, Amazon, Spotify, Pandora, and YouTube.

The Miró Quartet took its name and its inspiration from the Spanish artist Joan Miró, whose Surrealist works — with subject matter drawn from the realm of memory, dreams, and imaginative fantasy — are some of the most groundbreaking, influential, and admired of the 20th century. Visit miroquartet.com for more information.

One of only two wind players to have been awarded the Avery Fisher Prize since the award’s inception in 1974, David Shifrin is in constant demand as an orchestral soloist, recitalist and chamber music collaborator. He has appeared with many of the major orchestras in the United States and abroad, and has served as principal clarinetist with the Cleveland Orchestra, American Symphony Orchestra (under Stokowski), Los Angeles Chamber Orchestra, and others. Shifrin has been an artist member of the Chamber Music Society of Lincoln Center since 1989 and served as its artistic director from 1992 to 2004. He is currently the artistic director of Chamber Music Northwest in Portland, Ore. Shifrin also continues to broaden the repertoire for clarinet and orchestra by commissioning and championing the works of 20th and 21st century American composers.

Mr. Shifrin’s recordings have consistently garnered praise and awards. He has received three Grammy nominations – for a collaborative recording with the Chamber Music Society of Lincoln Center of the collected chamber music of Claude Debussy (Delos), the Copland Clarinet Concerto (Angel/EMI) and Ravel’s Introduction and Allegro with Nancy Allen, Ransom Wilson, and the Tokyo String Quartet (Angel/EMI). His recording of the Mozart Clarinet Concerto with the Mostly Mozart Festival Orchestra, performed in its original version on a specially built basset clarinet, was named Record of the Year by Stereo Review.

Hear Miró hear, then get tickets to hear them live on Sunday!
Thank you to our Chamber Music Series sponsor:

Rendezvous for Clarinet and Strings by Alan Shulman

Alan Shulman (1915-2002) was a composer, arranger, cellist and teacher who received his musical training at the Peabody Conservatory and the Juilliard School. He was a founding member of the NBC Symphony Orchestra, conducted by Arturo Toscanini, as well as a member of the Stuyvesant String Quartet. In 1946, Benny Goodman asked the Stuyvesant String Quartet to play a movement of the Mozart Clarinet Quintet with him on his radio program. In response to Goodman’s request, Shulman suggested that Goodman commission a work from him for clarinet and string quartet. The result is Rendezvous for Clarinet and String Quartet, sometimes called Rendezvous with Benny. The premiere took place on radio station WEAF in 1946.

Although Benny Goodman is chiefly remembered today as a bandleader and “The King of Swing,” he also commissioned, performed and recorded many classical works as a clarinetist, including Aaron Copland’s Clarinet Concerto (1947). In 1963, he premiered Poulenc’s Clarinet Sonata at Carnegie Hall, with Leonard Bernstein at the piano. Goodman collaborated with musicians from Yale University throughout his career, and was awarded an honorary doctorate from Yale in 1982. In 1986, his arrangements and recording masters were bequeathed to the Yale University Music Library.

Peter Schickele is a composer, arranger and pianist who received his musical training at Swarthmore College and Juilliard, studying with Roy Harris, Vincent Persichetti and William Bergsma. He has composed film scores for Silent Running, The Crazy-Quilt and Funnyman, and also composed music for films shown on the children’s television show, Sesame Street. In addition, he served as the musical arranger for the Pomp and Circumstance sequence of Disney’s Fantasia 2000. His works include Pentangle: Five Songs for Horn and Orchestra, String Quartet No. 1: American Dreams, and Spring Serenade for Flute and Piano.

As his alter-ego, P.D.Q. Bach (“the only forgotten son of the Bach family” and “the youngest and oddest of Bach’s twenty-odd children”), Schickele has toured the United States for over fifty years, creating and performing works such as Grand Serenade for an Awful Lot of Winds and Percussion, The Short-Tempered Clavier (Preludes and Fugues in All the Major and Minor Keys Except for the Really Hard Ones) and the “half-act opera,” The Stoned Guest. In 1989 and 1990, he won Grammy awards in the category of best comedy recording for his albums P.D.Q. Bach: 1712 Overture and Other Music Assaults and P.D.Q. Bach: Oedipus Tex.

Schickele states that Spring Forward for clarinet and string quartet was written “after a lifetime of entering sketches for such a piece into my notebooks.” It was commissioned by Chamber Music Northwest and Carl & Margery Abbott in 2014. Schickele has written that his mother was a clarinetist and that he attempted to take clarinet lessons as a child, but was encouraged to play bassoon instead. According to Schickele, the opening of the first movement was inspired by the season of spring, with a calm transition to summer later in the movement. In the second movement we hear “a hint of country fiddling,” as the composer states, followed by the third movement in scherzo-trio-scherzo form. After a brief, hushed interlude, the fifth movement depicts a sunset picnic that Schickele had with his wife on the Hudson River.

Clarinet Quintet in A major, K. 581 by Wolfgang Amadeus Mozart

Mozart met Anton Stadler sometime in 1781, shortly after he left his hometown of Salzburg and moved to Vienna. Three years older than Mozart, Stadler had already established a successful career in Vienna through his skill at playing the clarinet, which was a relatively new orchestral instrument at this time. Mozart was immediately impressed with Stadler’s musical abilities, and the two men became friends and members of the same Masonic lodge. Mozart composed not only the Clarinet Quintet but also the Clarinet Concerto and the clarinet obbligato parts in two arias from La clemenza di Tito with Stadler in mind. The Clarinet Quintet was actually written for the basset clarinet, which had an extended lower register. A 1785 letter from Mozart to Stadler states, “I have never heard the like of what you contrived with your instrument. Never should I have thought that a clarinet could be capable of imitating the human voice as it was imitated by you. Indeed, your instrument has so soft and lovely a tone that no one can resist it.”

The premiere of the Clarinet Quintet took place on December 22, 1789, at a benefit concert for orphans and widows of musicians held at the Imperial and Royal Court Theatre in Vienna. From this time on, Mozart referred to this composition as “The Stadler Quintet”. When Mozart died two years later, his widow, Constanze, asked Stadler to return the manuscript copies of the Clarinet Quintet and Clarinet Concerto, so that she could sell them to a publisher and pay off some of the debts that her husband had accrued. Stadler responded that the manuscripts had been in a valise that was stolen during his travels, but Constanze always suspected that Stadler had sold them to pay off some of his own debts. At any rate, these original manuscripts were lost; the version of the Clarinet Quintet that is now played was reconstructed from sketches and first printings.

The opening movement of the Quintet contains three themes, all introduced by the strings. The clarinet responds by adding ornamentation to the first theme, reiterating the second theme in a minor key, and finishing the strings’ statement of the third theme. The gloriously soulful Larghetto follows; its opening bars are similar to the famous Adagio movement of Mozart’s Clarinet Concerto, written two years later. In the Menuetto we hear two trios; the first for strings alone in a minor key, and the second with clarinet, in the spirit of the ländler, an Austrian folk dance in triple meter. In the finale, a folk-like theme is followed by five variations, including a melancholy lament played by the viola in the third variation, a virtuosic fourth variation for the clarinet, and the somber fifth variation. The Quintet concludes on a cheerful and sprightly note. However, as James Keller writes: “Nostalgic longing came naturally to Mozart’s musical expression, but he rarely vented it so freely, and at such uninterrupted length, as he did in this quintet, a major-key work with a minor-key aftertaste.”